A. W. Pugin & the Usefulness of Contrasts 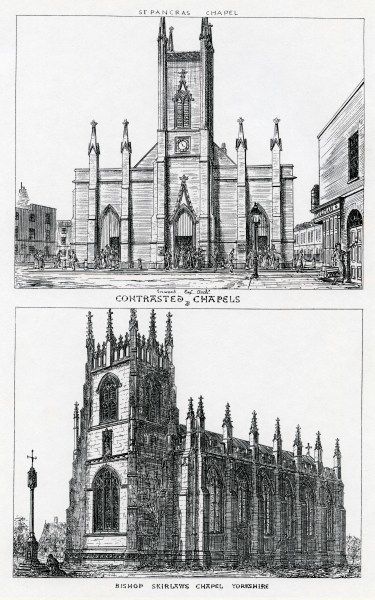 Aidan Allen and I have been considering the 19th Century Gothic Revival in Great Britain.  It was, of course, an architectural movement, not at all having to do with modern day “goths” who wear all black and sport heavy eye shadow.  Can you travel  in your mind to London, and picture Big Ben and the Houses of Parliament next to the river Thames?  The Parliament building is formally known as the Palace of Westminster, and it really isn’t very old.  The old palace burned down in a spectacular fire in 1834.  (The great English painter J.M.W. Turner painted the scene in one of his most famous works; people lined the river banks to watch the great blaze).  The new palace wasn’t completed until the late 1860’s.  They were working on it during our Civil War.

The winning design was submitted by Charles Barry.  Yet Barry had significant help from Augustus Welby Northmore Pugin, the leading advocate for Gothic design.  Pugin could not submit drawings in his own name because he had converted to Catholicism, and in London in the 19th Century that was a disqualifier.  Barry won the competition, but the 23 year old Pugin was named as co-architect and in fact drew thousands of designs for interior rooms, furniture, details, and exterior decoration.

Pugin had published a book in 1836 called Contrasts.  The book was polemical, meaning it was an attack.  Pugin was attacking the loss of quality Christian architecture and its replacement by pagan and commercial  ideas and/or shoddy workmanship.  It is fair to say that Pugin strained his argument in places, or overstated the contrasts between an idealized Middle Ages view and a modern industrialized reality.  Nonetheless, his core idea was that buildings of Great Britain’s medieval past were more noble and more Christian than similar buildings of Pugin’s time.  He strongly advocated a return of Christian, and specifically Catholic, virtue in public buildings.

Listen to his advocacy of Gothic architecture:

“Pointed or Christian Architecture has far higher claims on our admiration than mere beauty or antiquity...in it alone we find the faith of Christianity embodied, and its practices illustrated.

The three great doctrines, of the redemption of man by the sacrifice of our Lord on the cross; the three equal persons united in one Godhead; and the resurrection of the dead, --are the foundation of Christian Architecture.

The first--the cross--is not only the very plan and form of a Catholic church, but it terminates each spire and gable, and is imprinted as a seal of faith on the very furniture of the altar.

The second is fully developed in the triangular form and arrangement of arches, tracery, and even subdivisions of the buildings themselves.

The third is beautifully exemplified by great height and vertical lines, which have been considered by the Christians, from the earliest period, as the emblem of the resurrection.”

Later on, he really gets going, questioning the thinking and morals of the advocates of Greek design:

“In their considering the symbol of our redemption and the images of saintly personages more suitable to the residence of a Christian, than the statue of a lascivious Venus, or the representation of heathen fables?

….In their following the architecture that emanated from the faith itself in the erection of churches, instead of adopting a bastard imitation of Pagan edifices, unworthy and unsuited to so sacred a purpose?

In fine, by their setting forth the self-denying, charitable, devout, and faithful habits of the ages of faith, as far more admirable and exemplary than the luxurious, corrupt, irreverent, and infidel system of the present time?”

What Contrasts did, and what Pugin did, was lift up to a nation an impassioned explanation of two choices.  On one side was what the nation had been, and what it stood for.  On the other was the direction it was heading.  He underlined very Christian principles and meanings to the debate.  His was the world of architecture and design, and his argument largely prevailed.

I think there are many lessons here for Geneva parents and all who are supporting our Christian educational mission.  One is that study of the past, informed by a Biblical worldview and Christian history, helps us see more clearly the truly good and beautiful, and the falsely so.  Another is that even in “technical” fields, there are underlying assumptions about the universe, humanity, and morals that guide the outcome of work in those fields, and that Christians better be in them!  I could add the impact that a single, convicted person with gifting might have on an entire discipline and even country.  Or the importance of actually doing something about what’s important, rather than leaving it to others to hopefully figure out.

In closing, and with a change of subject, may I ask you to be praying for God’s provision of new faculty for the year ahead?  God has wonderfully rewarded the work and prayers of our fundraising team, and He has answered to date our prayers for health and safety at the school.  We need more teachers to take the place of dear ones leaving, and for expanding grades into two classrooms.

I look forward to next week’s Capstone Defense, and then in rapid succession Commencement and our End-of-Year Soirees.  Hope to see you soon!

Pugin’s quotes above are taken from the Cambridge University Press’s 2013 reprint of Contrasts, Or A Parallel Between the Noble Edifices of the Middle Ages and Corresponding Buildings of the Present Day, pages 1,2, 19.