The Wonder of the Ascension 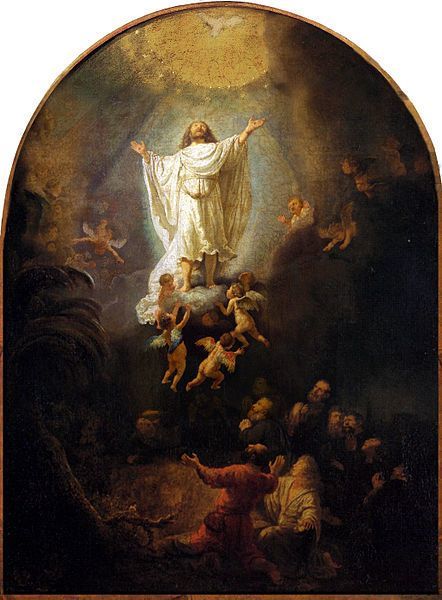 The Apostles Creed is a very ancient confession of faith, that has been used by the church for more than a thousand years. There is a phrase in it I want to pay particular attention to today – He ascended into Heaven.

Thursday is what is traditionally called Ascension Day – the day that is forty days after Easter when Christians around the world celebrate the ascension of Jesus to the right hand of God the Father.  This glorious fact of the ascension is recorded at the end of Mark and Luke’s Gospels. It is also recorded at the beginning of Luke’s Acts of the Apostles. It is the universal testimony of Christians across time and space. It is so simple to understand a child can get it, and so sublime a speculation that it has kept theologians busy for millennia.  It has inspired beautiful Christian art and imagination and music for decades.

Why celebrate the Ascension – so Jesus went up to Heaven. So what?! The Ascension is special because it sets the scene for Christianity. It separated early Christ followers from the secular Ceasar worshipers. The Caesars had cults dedicated to worship of themselves as sons of God, and as Gods themselves. They also claimed to have ascended to Heaven itself. If Jesus is the only Way, Truth, and Life then both of these claims cannot be true. That continues to have importance today, to those who would continue their reign in their stead, even if not in name.

The Ascension is important for other reasons too.  It not only sets the scene, it inaugurates the session where our Great High Priest not only reigns, but intercedes. Session is the name for the reign of a Sovereign.  In Christs Heavenly session, He not only intercedes for us as only a priest in the order of Melchizedek can, he also sends the Holy Spirit. Not only that – as if that were not enough - in the divine session, he sets a place for us at the Table for the Wedding Feast of the Lamb, and prepares for us a room in his Fathers Mansion.

When we look at the whole counsel of Christs Gospel, we will be struck by how central the Ascension is to the person and work of Jesus that we take for granted.  Do not take the doctrine of the Ascension for granted! It is under attack today. Scientists claim to have scoured the whole heavens, so this is supposed to disprove the ancient dogma. Nonsense!  Scientists can no more disprove the Doctrine of the Ascension with a telescope than elaborately designed biogenesis experiments prove life arose by chance without intelligence.  But the point of the Ascension is not mere head knowledge, it is to be combined with love and lived out to the greater Glory of God and good of our neighbor.  Orthodoxy must be combined with orthopraxis!  What better way to do that than wonder at the majestic mystery that is the burning fire at the heart of the Ascension.

The wonder of the Ascension is that even now our humanity is seated at the right hand of the Father, in the glorified human nature of Jesus Christ. In Christ, heaven broke in, and is even now breaking into our own reality and turning wickedness to His Holy purpose for us and our salvation.  Our God reigns! We can rest confident in his wise rule, because He has ascended into heaven and sits on the right hand of the Father.  Hope you and yours have a happy Ascension!